An original made in European Union, namely in Barcelona Supercomputer Center, a system of parallel programming \linebreak COMPSs is studied on an example of parallelizing a simple program written in Python language. After annotating functions with the explicit specification of input and output information, COMPSs parallizes programs automatically with a function as a grain (job) of parallel process granulation. The COMPSs runtime system launches jobs dynamically on the readiness of their input data on available nodes (cores). The COMPSs system perfor\-mance is rather open issue which requires additional comparisons on test tasks with classical systems of parallel programming such as MPI and OpenMP. 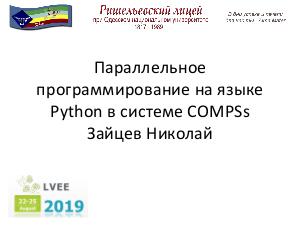 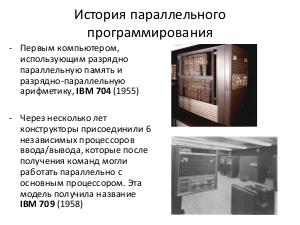 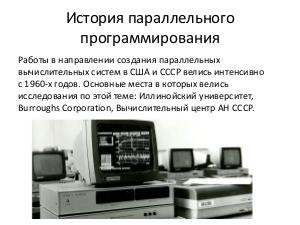 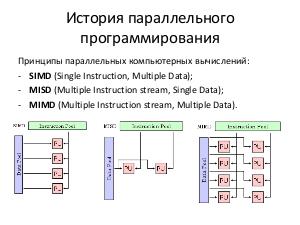 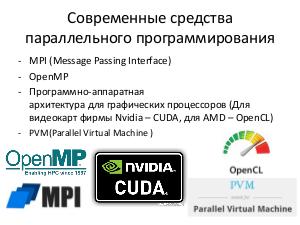 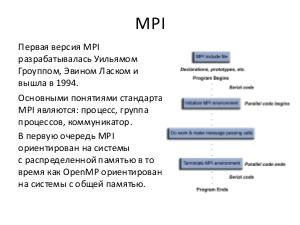 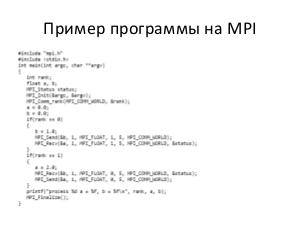 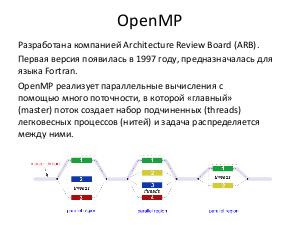 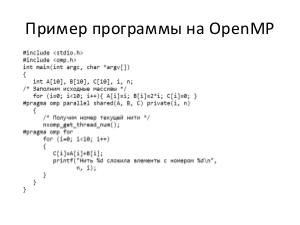 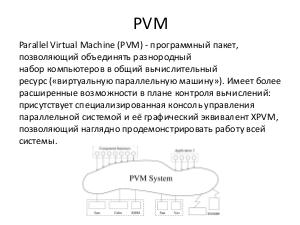 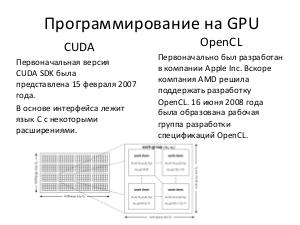 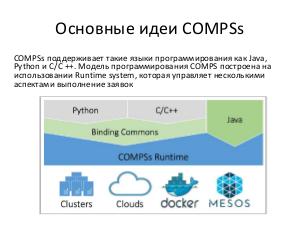 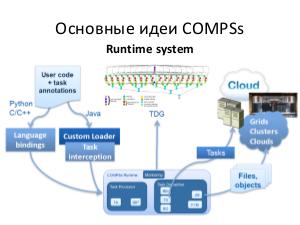 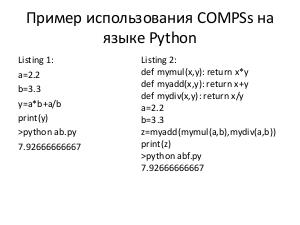 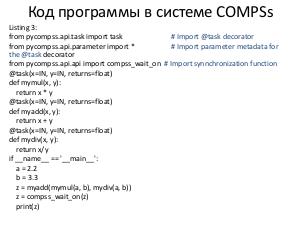 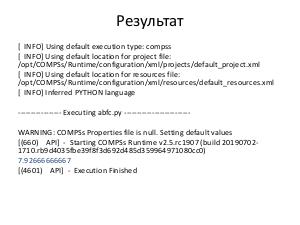 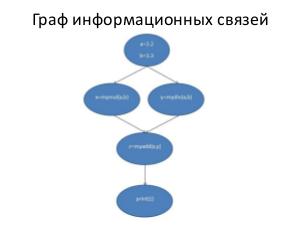 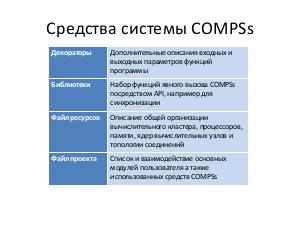 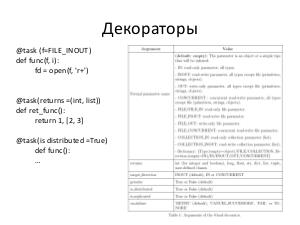 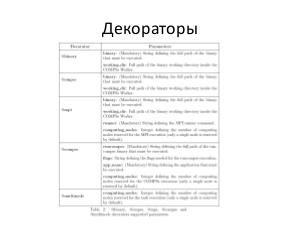 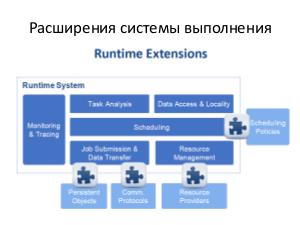 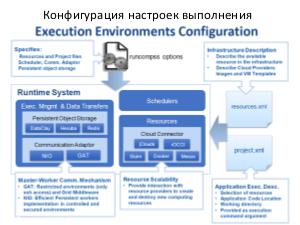 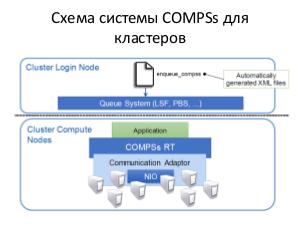 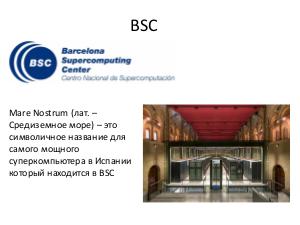 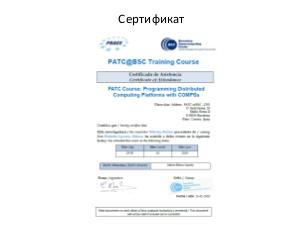 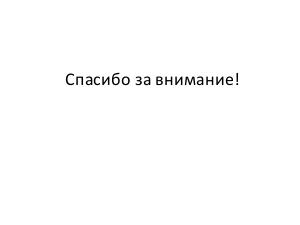 Among parallel programming systems, generally accepted standards are: MPI for distributed nodes; OpenMP for multi-core processors with shared memory; proprietary systems for graphics processors, such as CUDA for Nvidia graphics cards. All these systems require special approaches to the development of parallel programs. A programmer should plan numerous parallel branches and their complex interaction, which is often associated with additional errors.

The COMPSs system developed at the Barcelona Supercomputer Center is an open source system under the Apache License version 2. COMPSs provides a fundamentally new approach to parallel programming without parallel programming as such[1]. The minimal element of parallel processes granulation is a programming language function. The system COMPSs builds a graph of information connections of tasks and performs the dynamic launch of parallel processes on their readiness. This significantly reduces the complexity of developing parallel programs and ensures their correctness. The disadvantage of the COMPS system at its current experimental stage of its use is some instability and a relatively slow run-time system.

The Barcelona Supercomputing Center continues to improve the system by providing support for new programming languages; for example, COMPSs currently supports the development of programs in such languages as C/C++, Java, and Python[2]. Periodically, with the support of the European Union, schools and workshops take place on teaching programming technology within the COMPSs environment. One of such seminars was visited by the author in January 2019, where he received the corresponding certificate of the COMPSs programmer.

2. Principles of software development in COMPSs

For automatic program parallelization, the COMPSs system builds a well-known graph of information connections. The key point in the construction of the information connections graph is an adequate choice of the granulation level of parallel processes. Work at the level of individual operators of a programming language is rather time consuming and requires close integration with software of the compiler of a programming language.

To restrict the complexity of the implementation concept in COMPSs, the principal decision was taken: the unit of parallelization is a function of the programming language. To build a graph of informational connections, it is necessary to know exactly which of the function parameters are either input or output (or both). In order not to analyze the program code of functions for making appropriate decisions, COMPSs provides a special directive for annotation (decoration) of functions and some other program elements. From the point of view of the programming language, annotations are either special comments or directives of the compiler preprocessor. Besides, a small number of additional functions are used, for example, to synchronize processes.

3. A case study of developing a parallel program in the Python language

Consider an example of a simple program that calculates the value of an arithmetic expression represented in Listing 1. For simplicity, there is no input of the source data to the program, initial values are assigned to the variables a and b. Listing [NZ:lst1] also contains the command to start the program and the result of its computation. <source lang="python">a=2.2 b=3.3 y=a*b+a/b print(y) >python ab.py 7.92666666667</source> Analysis of the arithmetic expression allows us to assume that multiplication and division operations can be performed in parallel in a multiprocessor environment (if there are at least two processors). To implement these operations in parallel, we modify the source program in such a way that: a) we specify each of the mentioned operations and also the addition operation as separate functions of the Python language; b) we use the superposition of functions to calculate the value of the source arithmetic expression. The resulting program, along with its launch command and the result of its work, is presented in Listing [NZ:lst2]. Note that Listing 2 does not yet contain COMPS commands and is executed by the usual Python language environment. The results are the same.

The results coincide with the earlier considered results of the previous two program variants. In such a simple case, we, of course, did not speed up the execution of the program by parallelizing it. However, when two parts of a big program, which are equal in complexity, are separated to functions, we will get about twice the acceleration of the execution time of these functions. 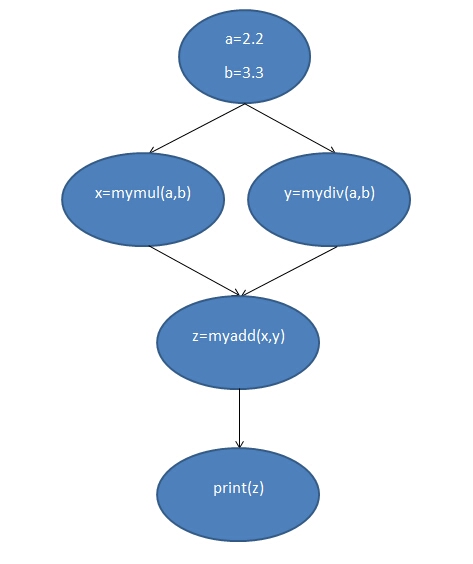 [(660) API] - Starting COMPSs Runtime v2.5.rc1907 (build 20190702-1710.rb9d4035fbe39f8f3d692d485d359964971080cc0) 7.92666666667 [(4601) API] - Execution Finished</source> Let us consider the additional lines of the program prepared for execution by the COMPSs system. The from ... import ... directive describes the import of additional external facilities of the COMPSs system. The task (...)@ decorator annotates the functions by specifying input parameters using the IN descriptor and the type of return value using the returns keyword. An expression for the conditional compilation of the main program if __name__ == ’__main__’: was also added, as well as a call to the synchronization function compss_wait_on (z) before printing the result z. To run the program, we use the special command runcompss.

Additional features of COMPSs, such as visualization of actual graphs of information connections, specification of cluster equipment, and project structure were left beyond the scope of this paper.

The article presents a case study of the basic principles of programs parallelization in the system COMPSs on an example of calculating the arithmetic expression. In essence, it is necessary to add only one additional decoration line for each function declared in the program. Further program parallelization is performed automatically.

Comparisons of COMPSs efficiency with the traditional parallel programming technology such as MPI/OpenMP are rather vague at the present time. That is why the author invites submissions of applied software for various domains which is represented in both variants: a) a conventional program; b) a parallel program in MPI or (and) OpenMP. Comparisons of the obtained benchmarks for 3 cases:

– will be reported to the next conference. 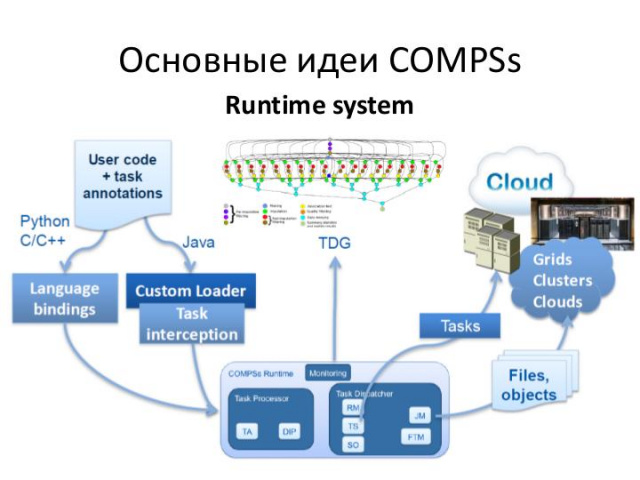